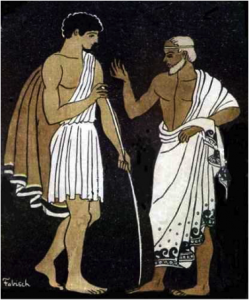 Article VI: Every Headmaster Can Use a Good Advisor

Mentor, trusted counselor, coach, advisor, guide, tutor, teacher are synonyms that describe the kind of person The Headmaster needs to gain wisdom for good decision-making.   Sometimes, The Headmaster needs to talk to someone that is not in one of his or her many constituencies and not a part of the chain of command.  Although he talks to his Board, sometimes he needs an advisor that is not his boss before making proposals to his boss.  While a good board member can be a good advisor, many school boards do not include an experienced headmaster.  Besides, the primary role of a board member is to develop strategic policy and monitor organizational integrity not to provide professional advice.  He consults his professional staff, division heads, key parents and donors, and for specialized advice his CPA and school attorney.  But sometimes the need is exclusive to the role of The Headmaster and he would be well served by speaking with an experienced headmaster as an advisor.

Odysseus had Mentor, his trusted counselor in the Iliad and Odyssey of Homer.  No matter how innately wise was the character of Odysseus, Homer makes it clear the man did not stand alone, or make decisions on his own.  King David had Ahithophel ‘And the counsel of Ahithophel in those days, was as if a man had consulted the Word of God’ (2 Samuel 16:23).  One can retain a certified life coach to help with difficult decisions and how to manage as “way leads on to way.” (Robert Frost) The President of the United States employs a plethora of advisors including the National Security Advisor, and the Joint Chiefs of Staff, ranking officers that are not in the chain of command to give him independent advice about matters of defense and war.  So, it should not be surprising when The Headmaster needs to talk to someone to gain wise insight for good decision-making.

A trusted advisor, counselor, coach or mentor, can help The Headmaster grow in his multifaceted role.  So, the wise headmaster will make sure the budget includes enough funding to cover such a position.  He would be well served to have an advisor on a modest retainer, talk weekly, and have access to him during times of crisis, difficult decision making, or after he has taken a battering from someone from his many constituencies.  I think this approach could make for better school leadership and extend the tenure of headmasters generally.

That is why I offer a Headmaster Advisory Service that can be accessed through a monthly retainer of as little as $500/month.  The Headmaster and I will talk through visionary thoughts and strategy, plans for the upcoming week, the current crisis, and how to grow as The Headmaster.  I look forward to serving about one half dozen headmasters per year every week through this approach.  I can be reached directly at rodney@marshalleducationgroup.com.